The next meeting, Mitchell took us through the museum on our first of many mock tours. We began in the gallery, Before the Other People Came. He smoothly transitioned from one case to another. I quickly realized how sketchy my “knowing” was. I knew nothing about the native tribes from other parts of the state. Not only that, but I had to make these tours sound like a story I am telling. Not a story I can make up. I had to learn the facts and offer an engaging and plausible story.

Before the Other People Came refers to how the Native Californians thought about their world. The time before the other people came is the time of the animals and the plants. The Indians felt that these were the first inhabitants of this land rather than people.

Before I returned home even more invested in studying, I stopped by the gift shop at the museum to purchase the first of many books on the subject of the California Indians: California Indians and Their Environment by Kent G. Lightfoot and Otis Parrish. I refused to stay discouraged. It is a thick little paperback covering everything about the natives and how they related to their environment. Telling their story through the environmental lens of course tells the whole story because that is all that there was, Indians and their environment, until the Spaniards arrived many years later. I had found my first “hook,” not necessarily for my tour groups, but for me. I figured that I could connect my learning to the environment. 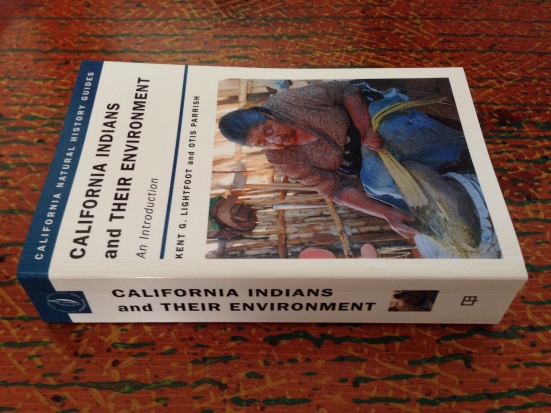 I started to read the first chapter, “Why Californian Indians Matter.” I tingled with sweat. Making the past come alive is one thing, making it relevant is the goal. I was struggling alongside the authors.

Several days later I received a group email from Mitchell about our next training day. We would have a quiz about this week’s material and were encouraged to come with a way to tell the story of the first gallery, Before the Other People Came.

I planned to spend several hours in the gallery immediately. I emailed several of my trainee friends and we exchanged worry emails over the next few days, then set a date to meet for a quick review of the first gallery. Meeting did little to calm me or make me feel confident. Both Kathleen and Harriet have so much knowledge from years of loving history. I was not familiar with most of what they talked about, declining to show them my practice tour, and taking notes from their smoothly crafted presentations. I returned home, even more nervous, to practice alone.

When I looked over the packet of reading for the week, I decided to talk about the things the Indians needed: shelter and food. We have little to show about their shelter, so I would need to produce some photos and point out the double duty of the tulle reeds, which were used for both shelter and transportation. Since we don’t have a tulle house in the gallery, the shelter piece would need to be presented using images rather than artifacts. But would I introduce the use of tulle without discussing our tulle boat, since I did not want to segue into the boats as transportation. At the same time, the boats are how some of the food is caught.

Now I was cooking. People need food. Food has to be found. The Native Americans could find food using woodpecker traps, fish traps and bow and arrows. I was getting it. I practiced using my living room and came up with a 15-minute tour I felt confident I could pull off.

My love seat was the tulle boat and I move from there to the fish trap basket, back to the small chair in the corner of my living room, which represented the rabbit skin cape in the bow and arrow case, to the armoire, which stood for the acorn granary. That was it. 15 minutes.

It was Tuesday again and I bounced into class. We went over a few guidelines, picked up our clipboards, pencils (the only writing tool allowed in the gallery) and were on our way to three hours of standing, listening and practicing.

Mitchell began, “Remember that we do not employ the usual tour techniques that most museums use. We are on the cutting edge. We use the ‘inquiry method.’ Notice that last week when I took you on a brief tour, I asked questions and involved you in the discovery of why the curators decided to put what they did in the cases. Why are the bow and arrows combined with the rabbit skin that the old man is wearing in the photo?”

I was lost. I realized that I had put together a linear tour for today, without one question. I had all the answers and none of the questions. I might as well have been in a torture chamber. I could not do a practice tour for today. I hoped that we ran out of time before I was called upon. I wanted to make myself small. Of course today, I chose to wear my museum colors so I was in a bright orange sweater with orange socks peeking out of my purple shoes. I was hardly invisible! And I was standing next to my friend Ron, who is shorter than I am. Ron, a docent at several other museums, knows everything about history.

Mitchell divided us into groups of four, with our group containing an extra member.

Kathleen’s presentation touched on several cases. She highlighted the  baskets and how integral they were to the Indian life. They encompassed the beginning of life to carry the newborns to the end of earthly life for burial. However, burial baskets have not been used for years. She segued into the circle of life of the black acorns and by then I was feeling like I had studied all the wrong things. Her presentation was elegant. Harriet focused on the tulle boat and the trade throughout California. She knew so many of the tribes by name and location. I scribbled notes furiously and wondered how I was going to mesh these the highlights of these two tours into my own. Ron was a reservoir of information and had figured out the critical questioning strategy.

“Emily, do you want to go next?” Ron asked. If I played my cards right and let the fourth member of our band go first, we’d run out of time for me.

“No, I’m fine. You go next,” I said to my foil. Another great tour, more notes, and, voila, I was exonerated. We had run out of time. Phew! But next week, I would  be first.

In order to use the actual names of my fellow docents, I asked their permission. In exchange they requested that I add a couple of comments. I hope they appreciate that however confident I appeared, I was quaking in my boots. You just never know.

Harriet wrote, “Too flattering—we regard you as the tour expert—but of course mention my name. This is a great idea.”

Kathleen said, “LOL! Early on I was terrified of your poise, knowledge and experience—even though you seemed very nice.”

Ron refers to me as the “funky lady” because of all my colorful attire that always carries an orange theme to it.

Next post: So much to read, so little time! 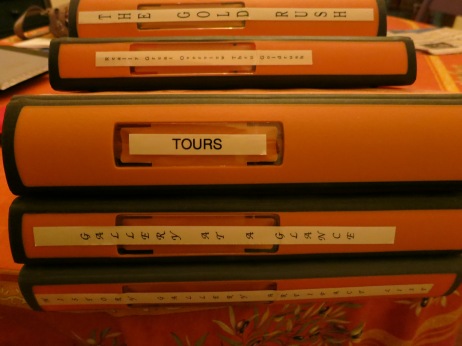 2 thoughts on “Before the Other People Came”